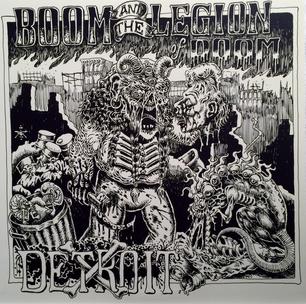 Boom and the Legion of Doom

The Official band web site of Boom and the Legion of Doom.

My very first encounter with Boom & the Legion of Doom was in 1984, or was it '83? Hell I don't remember, after all the dope I smoked and mescaline I ate, it's kind of a blur. Slaughterhouse was playing a show with Blight and Disinfect at The Farm in Williamston, MI. The Farm, as it turns out, was just that, a farm out in the middle of nowhere. This city boy was lost.
The night of the show it started raining so we got moved into in a bedroom that someone had committed suicide in.  The folks living at the farm had performed a séance a week earlier to ask “why?” I guess he didn’t want to talk. With everyone packed into the room, hallway and stairwell we started our set. Midway through our first song some crazed girl unplugs our guitarists amp accusing him of being, “Evil!” Plugging back in and moving along, crazed girl then grabs Bob's cymbal and splits his head open. Bleeding, puking and screaming Bob continued as we exercised the demons from that place.
At the end of the night I sat on the floor sipping my beer and chatting with friends when two scrawny, wild, shirtless kids burst through the door fighting. I sat there amazed as they rolled around on the floor punching, scratching and biting each other until finally falling away from exhaustion. Leaning against the wall, they spoke amongst themselves in a growling language all their own. I could pick out bits and pieces of doom and destruction, but none of it made sense. Who in the fuck were they? Where did they come from? All I knew was, they fit right in at this place and I slept with a screwdriver in my hand all night.
Fast forward a month or so (remember that mescaline?) and I'm helping out at The Hungry Brain. Bands are setting up and who do I bump into? It's wild, biting, wrasslin' boy! Drunk as shit, mumbling about mics and his band…band? Looking around, there’s the other kid hooking up a guitar. I try to converse as best I can and find out Mattitude, sings for The Legion of Doom and can "doom" people buy pointing his "devil-horned" hand at you and “pffffft!” while thinking bad thoughts about you. As proof he tells me about a kid he made fall off his bike. His brother, Tony Fish Only, plays guitar, along with Smelly on bass and Boom on drums. When they finally take the stage I'm amazed at the mayhem and chaos that ensues. What amuses me most is when bloody animal parts start flying and some mini skirted bimbo with a champagne glass gets hit smack dab in the chest!
From this point on I was in LOVE! THIS is what punk rawk should be! Fuck the Sex Pistols and every other band to call themselves punks! They were fast, sloppy and on the verge of being out of control, but that's the way it needed to be. Dangerous and on the edge! For weeks I was humming Butcher Boy and Damaged Pizza!
Boom & the Legion of Doom would go on to play Detroit many more times and create havoc wherever they played. Slaughterhouse & BLOD would become great friends, sharing many a brew over a dead critter at Bob's BBQ's. But like all good things, it didn't last. I played my last show with Slaughterhouse in 1989, sharing the stage with BLOD and left the craziness behind.
Now its 25 years later and I've reconnected with my brothers from BLOD. As I'm writing this, preparations are being made for an album release. We may be many miles apart but I still love them just the same. My wish is to someday share a stage with them again...in this life or the next. In a world filled with hippie Coexist love and “punk” bands such as Green Day, maybe it's just what we need, a little punk rock brutality, covered in sweat and blood.